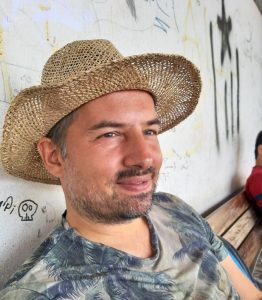 This is the homepage and blog of Stefan Karagiozis Schneider.

Here you'll find information about my academic, artistic, and somatic activities, along with reflections about movement and art.

Feel welcome to contact me: stefschn at uos dot de.

I just saw the dance performance MAX of the Batsheva Dance Company. The company is located in Neve Tzedek, the beautiful and oldest quarter of what then became Tel Aviv.

I enjoyed the performance very much. Especially the scenes with synchronized movements are impressive. See for yourself in the first part of the following video. And I often smiled about the subtle funny ideas that the dancers invented; you might get an idea of that from the dance duet in the second part of the video.

In the first scene in the following video you can get a glimpse of the strange and transforming effect that metallic sounds have if synchronized with body movements. Unfortunately I did not find the whole “machine scene”, which had different metallic sounds per dancer. … I cannot yet substantiate it but I felt reminded of a similar effect of sound words in comics, which make drawings much more vivid.

If it comes to crowded scenes without strong synchronization, the way dancers are moving is a bit solitary, though. And even in the duets, it seems to me that the dancers are contained in their own movement, which they only “externally” coordinate with the movement of their counterpart.

This might have to do with the specific talents of the company’s director, Ohad Naharin. Or it might be justified by the topic of the performance – e.g. the isolated human being in the 21st century or the like. But I guess that my impression has systemic reasons in the company’s dance practice, perceptible in the following video of a rehearsal for MAX.

Apparently lot of the company’s dance practice is based on the “movement language” Gaga developed by Ohad Naharin (which you could see dancing in the front). I have been told that in this practice, imagery is of high importance, e.g. the “snake of the spine”, or “the rope of the arms”.

From my Taijiquan practice I am very interested in the learning of movement. Taijiquan aims at developing a body scheme which allows an ease of movement based on anatomic constraints, and sensitive interaction with the constraints of your counterpart in partnerwork. An essential feat of Taijiquan is that movement is located “in the field of gravity” – all movement deals with gravity, as metaphors such as “the feet are heavy, the head is light” show. Every movement is initiated upwards from the “base”, that is, the feet, legs and hips move, this moves the trunk, this moves the arms. If I feel pressure on my arms, I let it go through my whole body down into the ground. You can get a very good idea of this from the Tui Shou (push hands) play of Wee Kee Jin and Paul Renall.

So from the way that I practice movement, Gaga movement feels detached from the ground, kind of discordant to gravity. The set of images used is probably of crucial importance and constitutive for Gaga (as well as for Taijiquan), and particularly, which “image” has the “primary control” (to borrow a notion of F. M. Alexander). My premature observation is that movement in Gaga is initiated from the centre of the body, extending to the extremities, but not so much aligned to the ground or a partner. This might contribute to my impression that the dancers dance solitarily.

I want to add and emphasize that this is only a very narrow observation and that I do not believe to say something essential about Gaga itself here. I am interested in “knowledge organization” in general, the acquisition and growing expertise in a domain, and consider body & movement schemas to be knowledge systems. The rehearsal video above clearly shows that also connecting to the ground does happen in Gaga – in this respect it is more open and flexible than Taijiquan.